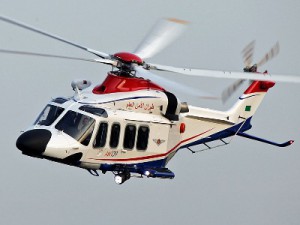 AgustaWestland, signed a contract for a fleet of AW139 twin engine helicopters to equip the Saudi Aeromedical Evacuation Department of the Ministry of Defence of the Kingdom of Saudi Arabia. The helicopters will be configured with a dedicated aeromedical interior to perform air ambulance operations, with deliveries starting in 2013 and being completed in early 2014.

It is the first order for the AW139 to be placed by the Ministry of Defence of the Kingdom of Saudi Arabia and continues the success of the AW139 in the Kingdom, where it is already performing demanding missions with other prestigious operators.

The AW139 has been recognised by many of the world’s leading aeromedical organisations as the most capable helicopter in its class, thanks to its outstanding performance and the easily accessible large cabin for patients and the medical team. The AW139 will further enhance the aeromedical evacuation service in the Kingdom of Saudi Arabia, helping it to save lives and deliver medical treatment to those in need in the shortest possible time.

With more than a 130 AW139s sold in the Middle East region, the AW139 is the market leader, offering new standards in terms of state-of-the-art technology, performance in the most demanding weather and environmental conditions and low operating costs. The AW139 is the only helicopter in its class to meet the latest civil safety standards and features Cat. A (Class 1) performance, a 30 minute run dry capable main gearbox and an advanced Health and Usage Monitoring System (HUMS).

The AW139, together with the AW169 4.5 tonne light intermediate and the AW189 8 tonne class twin engine helicopters, is part of the AgustaWestland Family of new generation helicopters which posses the same high performance flight characteristics and safety features as well as sharing a common cockpit layout, design philosophy and maintenance concept. This commonality will allow more effective operations for customers operating helicopter fleets across the 4 to 8.5 tonne categories.

5 thoughts on “Saudi Medevac to Be Equipped with AW139 Helicopters”